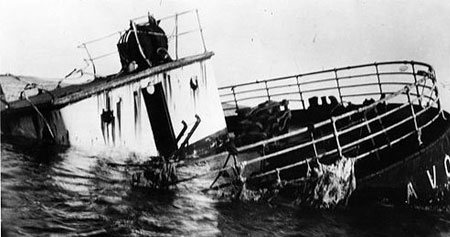 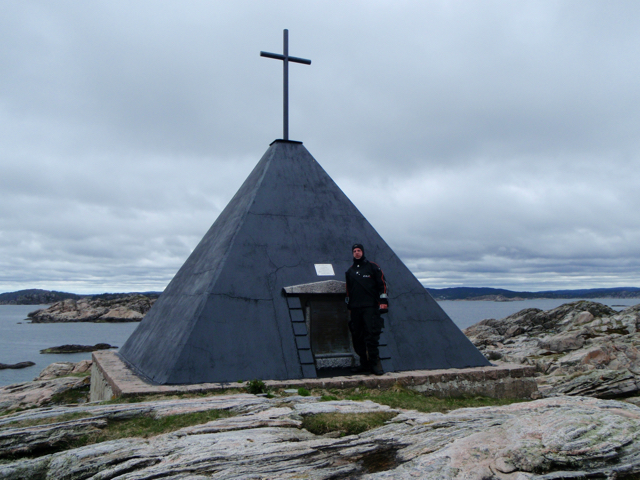 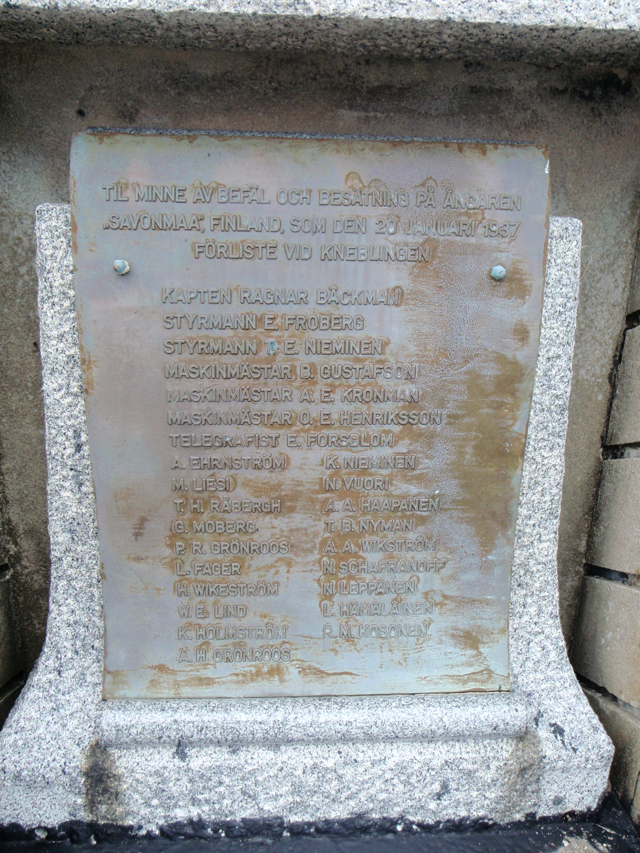 The wreck of the “Savona” testifies to a tragedy that took place on 20 January 1937 and the Mandal region rocked hard back then. The freighter was in an icy gale eight lost and none of the 26 sailors on board survived the disaster. At that time, this was one of the most tragic shipwrecks that had experienced the region until then. Accordingly great was the sympathy of the local population. At the place where they found the first victims of the “Savonmaa” disaster, was built later a monument in the shape of a stone pyramid with a board on which the names of all victims of the tragedy are listed. Overall, only five or six bodies were recovered, the other one was never. At the funeral ceremony was attended by about 4,000 people from the region Mandal . At a memorial service on August 7, 1938 at the memorial stone was attended by over 6000 people even, who arrived with more than 300 boats! These figures hint at the consternation caused the tragedy of “Savonmaa” in the region. Sometime in 2007, a memorial service was held for the 70th anniversary of the disaster at the Monument to Kniblingen. The “Savonmaa” -Monument you can still visit at a shore leave, which can be easily combined with a dive at the wreck. This makes a dive at the “Savonmaa” a special event.

The “Savonmaa” ran in 1921 as “Franconia” from the stack. Shipyard was the Eriksberg Mek. Verkstads AB in Malmö, Sweden. The client was the Swedish shipping company Rediri-AB Svenska Lloyd, headquartered in Gothenburg. The ship was built of steel and had a two-part structure at midships, which gave him a distinctive line. Behind the bridge house was a cargo hatch behind which was another deck structure arranged yet, on which was the only chimney of the ship. Overall, the “Franconia” had five cargo hatches on which stood two masts. The “Franconia” to go under this name in trip but never. After the ship was finished, it was delivered under the new name “Roland” to the Ångfartygs AB Tirfing based in Gothenburg. For its new owner, the “Roland” was driving on the Svenska Orient Lines. In 1936 she was finally sold to the Finnish shipping company Finska Ångfartygs-AB in Helsinki. These christened the ship by the name “Savonmaa”.

The January 1937 was marked by storms, as they occur rarely in such strength and durability. It had come off the coasts of Norway already to several ship losses by these weather conditions. On the night of the 20th of January, the “Savonmaa” fought near Kniplingsholmen by a storm, which had grown into a hurricane. Moreover blizzard reigned. She was under Captain Ragnar Bäckman on a drive from Vyborg near St. Petersburg via Helsinki to Manchester. The cargo consisted of paper and general cargo, which also includes grave stones were. What exactly that night on the “Savonmaa” took place is not known, since no one survived the tragedy following in order to tell about it can. Even otherwise eyewitnesses did not exist. At 1:30 clock an emergency call was received in Flekkerøy. But on the coast the power had collapsed due to the storm. Therefore, could not answer it. Only two Danish radio stations had contact with the “Savonmaa”. The nearest emergency vehicle was an old non-motorized rescue boats from Ny Hellesund who had but a hurricane little to counter. The first radio messages give the impression that “Savonmaa” was accrued on the reef of Ballastkjaerne. After a final radio message at 3:05 clock contact with the distressed vessel broke off. Help could be sent until the following morning, after the storm had abated. But the position that had the “Savonmaa” indicated, proved to be false. Only after hours of searching the heavily damaged “Savonmaa” was spotted by a fisherman from Flekkerøy at Kniblingen due to lying. The bug was already under water and wreckage were scattered in the area. Only the tail sticking out of the water yet. As they approached the emergency vehicles, was found by the crew no trace. The help came too late. None of the 26 men aboard had survived the tragedy. Probably the lake had it all away by board before they could make the lifeboats clear. Despite near several coastal islands to the scene to survive in the freezing cold of the winter stormy night was impossible. On the following day several bales of paper were still recovered from the charge of “Savonmaa” that had been washed up on the beaches. Under one of them the first corpse of one of the crew members was found. He had apparently still managed to get to shore, but he was completely soaked froze in the icy stormy night. A few days after the sinking of a local diver was commissioned to salvage operations. He managed to recover money and the stamp collection of the captain. He also hid 150 grave stones from the charge. Later the wreck was sold to the brothers Anda from Stavanger, which blew up in part, to gain access to the load. It came to a tragic diving accident in which a salvage diver was killed. The wreck of the “Savonmaa” sank definitively in December 1937th.

Today the remains of the “Savonmaa” lie in a depth between 18 and 25 m in Kniblingen. The wreck location is in a coastal offshore archipelago formation and is therefore quite exposed. They can be approached therefore more at low wind speeds and preferably offshore winds, since it is then in the lee of the rocky island, in front of which lies the wreck. The tail section is almost completely destroyed by the nave. The hull is largely collapsed and is inclined to port. In the front holds many of the powerful paper rolls are almost completely intact. In the wreck environment, there are numerous pieces of paper drifting loose things. In between occasional columnar, slender stones stand with a square base that might be mentioned the grave stones. Only the bow, which is a few meters from the main wreckage at 90 ° port side, is in very good condition and offers an impressive sight, especially viewed from directly in front. From the port side one looks directly on to the deck with his Ankerklüsen and stairways. The signature “Savonmaa” can be seen in applied steel letters yet.